One thing a lot of users have to deal with is sudden power loss on their PCs. This can be due to a power outage, a failing piece of hardware, instability from overclocking, or even a BSOD from bad software and drivers. In enterprise uptime is critical, so servers usually have a backup power source. Enterprise SSDs also often have capacitors or batteries so the drive has enough time to flush data to non-volatile media in the event of power loss. Of course, there are many other techniques to ensure data integrity, but consumer SSDs and machines are less protected in general. 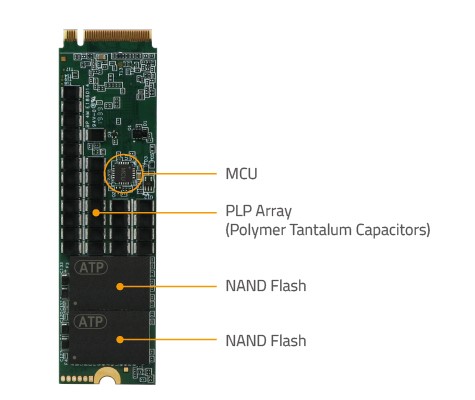 SSD with capacitors for PLP. Source.

There are two kinds of storage data protection: that for data-at-rest, and that for data-in-flight. Power loss protection, as described above, is typically to protect data-in-flight. This includes data that is actively being written. Data-at-rest is data that has already or previously been written, and that sort of protection is common on modern consumer SSDs. This is important because multi-level cells write one page or bit at a time but the cell still contains a singular voltage for all of the bit values. Therefore, protecting the lower bits and pages is important when writing additional data to the cell.

Data-at-rest can be protected in multiple ways but the general idea is to determine the original value and rebuild or refresh it if the voltage threshold is out of alignment. This is done at the SSD’s next power-on, but that’s not the only thing the drive does at that time. It’s also busy loading boot code, metadata tables, and more. Some of these functions must be completed for proper operation. This is one reason that repeated power loss or failures to boot can be damaging to the drive’s firmware, eventually "bricking" the drive. Our drives use robust firmware to ensure your data is protected and the drive remains usable. We recommend that users have an uninterruptible power supply (UPS) or battery and additionally avoid running an unstable system. Users should also back up their data regularly, for example using a 3-2-1 system as described in our Backups blog; RAID is not a substitute for a backup scheme. Remember: if you take care of your hardware, it will take care of you.